In this interview, we spoke to Lorenzo Piemonti, Director of the Diabetes Research Institute and Director of Human Islet Transplantation Program at the San Raffaele Scientific Institute (Milan, Italy). Professor Piemonti also serves as Chief of the Beta Cell Biology Unit, Director of the Human Islet Processing Facility and coordinator of European Consortium for Islet Transplantation that has been providing human beta cell products for research and clinical applications at Ospedale San Raffaele, in Italy and across state barriers in Europe since 2000. His area of expertise is focused on diabetes and pancreatology; in particular diabetes therapy and pathophysiology, regenerative medicine and pancreatic cancer.

Why is diabetes a good candidate to be treated with regenerative medicine? 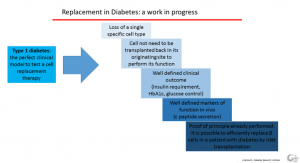 Type 1 diabetes is the perfect clinical model to test a cell replacement therapy. It is characterized by the loss of a single specific cell type. Cells do not need to be transplanted back to their originating site to perform their function and this is a great advantage in comparison to other fields, such as neuron replacement. We have already a well-defined marker of in vivo function, C-peptide secretion, and we have well-defined outcomes to evaluate the clinical impact, including insulin requirement, HbA1c and glucose control. Last, but not least, a proof-of-principle experience has already been performed: it is possible to efficiently replace β cells in a patient with diabetes by islet transplantation. All these elements make Type 1 diabetes a good candidate for replacement strategies.

What are the disadvantages of using non-human donor cells, such as porcine β cells?

Since the 1990s, researchers have attempted to use pigs as the source animal for islet xenotransplantation, as they are currently considered the most appropriate candidate species. Reasons for this include the pig’s relatively large litter size and short maturation period, its size and physiological similarity to humans, the low risk of xenozoonosis, and the readily application of genetic engineering techniques to produce porcine organs that are resistant to rejection. However, the genetic discrepancy between pigs and humans has resulted in barriers for xenotransplantation, including immunological rejection, and risk of xenozoonosis.

What challenges remain to the large-scale differentiation of cells from stem cells, including embryonic or induced pluripotent stem cells? 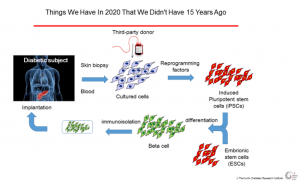 Large-scale differentiation of beta cells from pluripotent stem cells is already done and at least two cell products are now being tested in Phase I/II clinical trials. Despite this, there are still some issues that need to be solved:

Moreover, in terms of clinical experience we do not know the optimal dosage or cell composition, and the optimal site of implantation, but we know that these approaches are very costly.

What do you think will be the next advance in production or application of cell-based therapies?

I’m quite sure that in the field of replacement, the most relevant advance in the near future will be the availability of the next generation of gene-edited stem cells to safely escape the immune recognition, avoiding the use of immunosuppression. If I think outside diabetes, the possibility of having regulatory CAR-T cells for curing autoimmunity and rejection could be the second field after oncology in which cell-based therapies have a chance to change the horizon.

What other talks are you looking forward to attending at ELRIG Cell & Gene Therapy 2021 and why?

“Is the Cellular Secretome the Next Step of Cell Therapy?” from Philippé Menasché (INSERM, France): the consistent observation of a functional benefit when cells were no longer physically present in the transplanted tissue suggest we could shift from the initial concept of replacement therapy to paracrine signaling, where the blend of biomolecules secreted by the cells regulate endogenous repair pathways.

Disclaimer
The opinions expressed in this interview are those of the interviewee and do not necessarily reflect the views of RegMedNet or Future Science Group.

Considerations for quality and consistency in stem cell culture reagents: an interview with Miriel Ho

The future of brain repair: an interview with Jack Price